Genk – The construction of the FacThory on Thor Park in Genk – the campus for companies in the innovative energy and smart manufacturing industry – has officially started in the presence of the Flemish Minister of Economy, Innovation, Work, Social Economy & Agriculture Jo Brouns. FacThory will be a multifunctional building with modular production, lab and test areas and offices for smart manufacturing companies. This is a project by the City of Genk, LRM, POM Limburg, KU Leuven, Flanders Make and SIRRIS, which represents an investment of 20 million euros. The project is supported by the European Regional Development Fund (ERDF – project 1383, 5.2 million euros) and the Agency for Innovation and Entrepreneurship (Hermes Fund, 1 million euros extra support). FacThory is the first concrete step in the realisation of a smart manufacturing campus on the site. Added to the other ambitions at Thor Park, the site should generate 5,000 extra jobs over ten years.

Thor Park in Genk, covering 93 hectares, is a global redevelopment project on the former Waterschei mining site and today already offers a unique cocktail of technological research, talent development and industrial activity. The site is a hotspot for smart, sustainable and innovative companies with a focus on energy transition, smart manufacturing industry and smart city applications.

On the site you will find the renowned research institute EnergyVille where researchers from imec, VITO, KU Leuven & UHasselt join forces. On the T2 campus, students, employees, entrepreneurs and job seekers can choose from more than 300 training courses in engineering and technology. The imposing old mining building was renamed Thor Central by the City of Genk, a successful business and activity centre.

Moreover, Thor Park is the very first restricted zone in Flanders, which offers opportunities for companies and researchers. Young companies that focus on smart energy, innovation and the manufacturing industry are guided in the IncubaThor building.

FacThory: the factory of the future

Start-ups, scale-ups, as well as mature companies can go there to develop and test processes for automation, digitisation and robotisation. FacThory is a project by the City of Genk, LRM, POM - Limburg, KU Leuven, Flanders Make and SIRRIS, and represents an investment of 20 million euros. The project is supported by the European Regional Development Fund and the Agency for Innovation and Entrepreneurship (Hermes Fund).

Joris Merckx, general manager of the Thor Park company: “The ground floor is being set up as a production floor for companies that make or assemble an end product, or that want to optimise or scale up a process by setting up a pilot line. On the first floor you will find labs and test rooms for companies that are working on a prototype or offer support services in the manufacturing process – such things as integrators, robotisation, automation and so on. The second floor consists of offices, both for companies that you can also find in the rest of the building, as well as for tech companies active in industry 4.0. FacThory will be putting Thor further on the map, including beyond the national borders. Thor Park has a solid foundation where all the parameters for a perfect symbiosis of innovative technology and social transition are to be found. Thor Park will become a strong brand synonym for sustainable and innovative economic valorisation.”

FacThory is the perfect operating base for smaller companies looking for a permanent location, or for larger – Belgian and international – companies that want to work undisturbed on new products or processes, separately from the head office. They will find an external R&D site there and come into contact with other innovative companies working on industry 4.0-related applications.

A strong ecosystem is created By literally bringing all those companies together under one roof. Clever cross-fertilisations are created in which companies use each other's activities to grow further. For example, a company developing XR technology in the offices will benefit from another company's machines on the production floor. The company on the production floor can in turn obtain advice from process experts in the test room and can make use of software developers in the offices.

“FacThory takes Thor Park to the next level in its growth curve,” said Tom Vanham, LRM General Manager and Thor Park Chairman. “This former mining site has already undergone an impressive transformation and is a prime example of reconversion. And here too the triple helix story prevails. The powerful synergy between the knowledge institutions, researchers and training partners that are already active on the site today is a lever to attract even more private companies to Thor Park. FacThory will be an additional catalyst for the local manufacturing industry – which plays an important role for our province. Thor Park is thus heading straight for its goal: to be the technology hotspot where sustainable business innovation is supported and new business can be developed in a dynamic ecosystem. Companies in the manufacturing industry in particular – a sector that LRM has been actively focusing on in recent years – and the energy sector will feel at home here.”

Jo Brouns, Flemish Minister of Economy: “The FacThory will play a crucial role in the transition to a sustainable economy and a strong Flemish manufacturing industry. It offers opportunities for smaller companies to test ideas or developments on a larger scale, so that they can subsequently grow faster to a new application in the industry.”

Wim Dries, Mayor of the City of Genk: “With the realisation of the FacThory, we confirm that the manufacturing industry will remain an important spearhead for Genk industry, even after the closure of Ford. This initiative will give industrial companies in Genk and the region the opportunity to continue developing in the broad domain of industry 4.0. In time, this will also contribute to the creation of new jobs, both for highly educated people and for people with technical training at TSO and BSO level.”

Koen Debackere, KU Leuven: "With imec, KU Leuven, UHasselt and VITO already present at Thor Park with EnergyVille, companies active in both energy and industry 4.0 will find a gateway to top technology and innovation here. Via SIRRIS, the Industrya investment fund, LRM and other key players who are also present at the park, the translation to applications on an industrial scale is also being strengthened. It is that bridge between knowledge and market within energy and industry 4.0 that will have a unique place at Thor Park and will bring absolute added value for many companies."

Deputy for Economy and chairman of POM Limburg Tom Vandeput: “FacThory will play an important role in making our Limburg manufacturing industry future-proof. In recent decades, it has been one of the mainstays of our economy and to this day indirectly provides a multitude of jobs in other sectors. Nevertheless, the importance of the manufacturing sector in employment and turnover is declining. With digitisation, automation and robotisation we can turn that tide and further prepare the Limburg manufacturing industry for the future. FacThory at Thor Park plays a key role in this, as a test environment for Limburg companies to further innovate their production processes.” 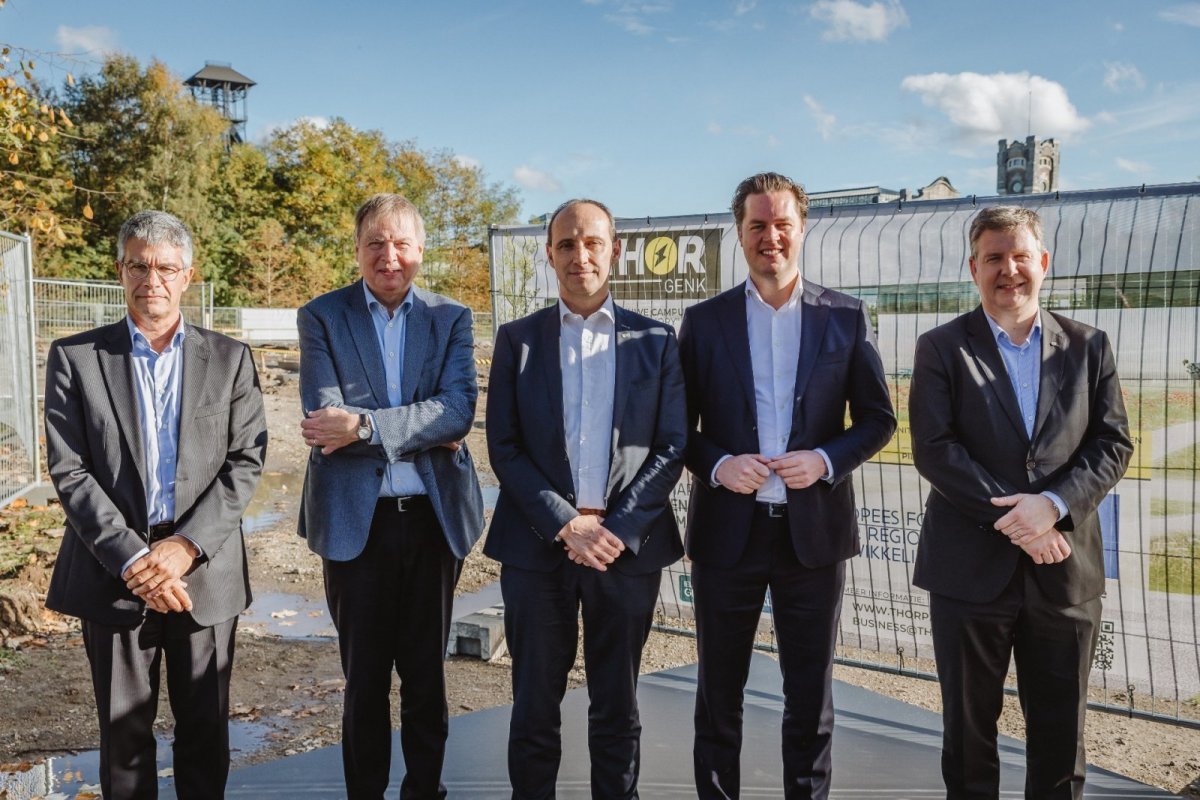